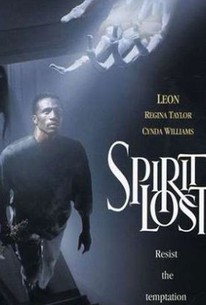 If Oprah's Book Club had a horror movie department, the result might look a lot like this anemic ghost story produced by WKRP in Cincinnati's Tim Reid for BET. This is supposed to be an erotic ghost story, but director Neema Barnette seems baffled as to how to make even one scene sexy or scary. Mostly, lead actor Leon just wanders around like a dope while the female characters care, share, nurture, and talk (and talk and talk). At times the film looks more like a tarted-up Lifetime version of Waiting to Exhale than a horror movie, bringing home the notion that a married man's infidelity to his pregnant wife is rather difficult for her to deal with, and not just because he's sleeping with a 200-year-old succubus. Indeed, there was no reason for Arabella to be a ghost at all in the grand scheme of things, and one can almost picture Reid looking at a dull, soap-opera script about a love triangle and thinking, "maybe I could sell this if the 'other woman' was a ghost?"

There are no critic reviews yet for Spirit Lost. Keep checking Rotten Tomatoes for updates!

There are no featured audience reviews for Spirit Lost at this time.