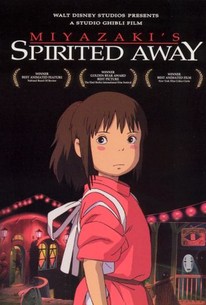 Spirited Away is a dazzling, enchanting, and gorgeously drawn fairy tale that will leave viewers a little more curious and fascinated by the world around them.

Master animation director Hayao Miyazaki follows up on his record-breaking 1997 opus Princess Mononoke with this surreal Alice in Wonderland-like tale about a lost little girl. The film opens with ten-year-old Chihiro riding along during a family outing as her father races through remote country roads. When they come upon a blocked tunnel, her parents decide to have a look around -- even though Chihiro finds the place very creepy. When they pass through the tunnel, they discover an abandoned amusement park. As Chihiro's bad vibes continue, her parents discover an empty eatery that smells of fresh food. After her mother and father help themselves to some tasty purloined morsels, they turn into giant pigs. Chihiro understandably freaks out and flees. She learns that this very weird place, where all sorts of bizarre gods and monsters reside, is a holiday resort for the supernatural after their exhausting tour of duty in the human world. Soon after befriending a boy named Haku, Chihiro learns the rules of the land: one, she must work , as laziness of any kind is not tolerated; and two, she must take on the new moniker of Sen. If she forgets her real name, Haku tells her, then she will never be permitted to leave. ~ Jonathan Crow, Rovi

Takehiko Ono
as Employee
View All

News & Interviews for Spirited Away

Critic Reviews for Spirited Away

Audience Reviews for Spirited Away