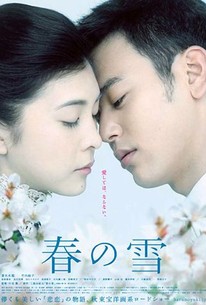 Independent Japanese filmmaker Isao Yukisada collaborates with screenwriters Chihiro Ito and Shinsuje Sato to adapt author Yukio Mishima's sexually tinged tale of obsession and intrigue in Taisho era Japan. The year is 1912, and as Emperor Taisho takes power the Japanese upper class begins mirroring the refined social graces of European aristocrats. Noble bloodline youngsters Kiyoaki Matsugae (Satoshi Tsumabuki) and Satoko Ayakura (Yuko Takeuchi) are two such citizens, and though Satoko harbors feelings for Kiyoaki that run much deeper than friendship, the girl's disapproving father (Kenjiro Ishimaru) fears that the Kiyoaki's lecherous father (Takaaki Enoki) has passed his unchaste manners on to the next generation. Having fallen from grace with the rise of Emperor Taisho, the families of both children must struggle simply to stay afloat financially. Even as she enters into her final year of high school a decade later, Satoko still longs to be with her childhood sweetheart. In order to sidestep the romance, Kiyoaki ponders the prospect of setting Satoko up with his high-strung military school pal Shigekuni Honda (Sosuke Takoaka). Later, when Kiyoaki forces sex on Satoko and the teen becomes pregnant, she furtively plans to have an abortion before traveling to Nara to become a nun.

There are no critic reviews yet for Spring Snow. Keep checking Rotten Tomatoes for updates!

There are no featured audience reviews for Spring Snow at this time.