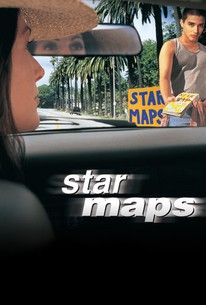 This comedy-drama concerns a most unusual family of emigres, even by Hollywood standards. Douglas Spain stars as Carlos, a Mexican teenager who has just returned home to L.A. after starring in several low-budget films south of the border. His father, Pepe (Efrain Figueroa), is a Fagin-like pimp who manages a group of boy prostitutes who pose as sellers of maps to the stars' homes on Hollywood street corners. Pepe immediately sets his son to work doing the same, but Carlos has dreams of being a movie star. His goal takes a step closer to reality after he sleeps with Jennifer (Kandeyce Jensen), a soap opera actress who becomes enchanted with Carlos and orders her show's producers (one of whom is her husband) to write a part for the boy on the series. Once he's on his way to becoming a star, Carlos discovers that success has a price tag. Star Maps was the feature debut of writer-director Miguel Arteta, who went on to helm the short-lived series Freaks and Geeks (1999-2000) and his acclaimed second film, Chuck and Buck (2000), an audience favorite and Grand Jury Prize nominee at the 2000 Sundance Film Festival. ~ Karl Williams, Rovi

Doug Kieffer
as Waiter
View All