Starting Out in the Evening 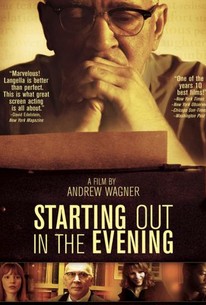 Starting Out in the Evening

Starting Out in the Evening features sharp dialogue and moving performances from the talented Frank Langella and Lili Taylor.

Starting Out in the Evening Ratings & Reviews Explanation

Starting Out in the Evening Photos

Frank Langella (Dracula, Good Night, and Good Luck.) stars in Andrew Wagner's independent drama Starting Out in the Evening, an adaptation of the acclaimed 1999 best-seller by Brian Morton. Langella plays Leonard Schiller, a once-celebrated author whose first four novels inspired Heather Wolfe (Lauren Ambrose) to pursue a career as a writer. These days, Leonard is still working toward completion of the novel that has occupied his life for nearly a decade. On the surface, Leonard has removed himself completely from the deep-seated need for success that characterized his life at an earlier point in time; but on a more buried level, he still longs for his fiction to be rediscovered and re-acclaimed. Now an eager graduate student in the throes of her thesis, Heather is writing her dissertation on Schiller, and promptly convinces him that she can use the thesis to regenerate popularity and discovery of his work. Heather also projects personal interest in Leonard, however, which cuts straight through to the core of his loneliness and brings him in touch with his need for a meaningful relationship even as it leaves him feeling shaken and increasingly uncertain. Meanwhile, Leonard finds that his relationship with his daughter, Ariel (Lili Taylor), is challenged, both by Heather's presence and by Ariel's decision to begin dating her former boyfriend Casey (Adrian Lester) once again -- a fact that Leonard finds most upsetting thanks to his disapproval of Casey. Suddenly, Leonard feels his entire world turned upside down, from his familial relationships to the security of his writing to his own physical vitality -- but he is also taking risks and plunging headfirst into the core of life for the first time, thus living out the principles long celebrated and upheld in his fiction and giving himself the capacity to grow.

News & Interviews for Starting Out in the Evening

Critic Reviews for Starting Out in the Evening

Audience Reviews for Starting Out in the Evening

Starting Out in the Evening Quotes