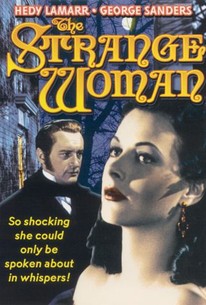 B-movie auteur Edgar G. Ulmer managed to direct a few A-pictures during his long career; he was personally selected by Hedy Lamarr to helm this big-budget thriller, a project she put together to change her image as a starlet whose sex appeal outweighed her acting abilities. Set in the early 19th century, The Strange Woman takes place in Bangor, Maine, where logging and lumber mills have made the town prosperous. Jenny Hager (Lamarr) has grown up in Bangor, not far from the watchful eye of wealthy Isaiah Poster (Gene Lockhart). The fact that Jenny is twenty years Isaiah's junior does not stem his amorous intentions, and when she's finally out of her teens, Jenny accepts his proposal of marriage. But beneath her sweet exterior, Jenny is a shrewd, conniving women, and while she makes a fine life for herself with Isaiah's money, she obviously doesn't care for him. When Isaiah's son Ephraim (Louis Hayward) visits from college, Jenny is immediately attracted to him, and she tells him that she'll marry him if he murders his father. But, unknown to Ephraim, Jenny is already scheming to win the affections of businessman John Evered (George Sanders), even though he's pledged to marry her best friend Meg (Hillary Brooke). Based on a novel by Ben Ames Williams, The Strange Woman was generally considered one of Hedy Lamarr's best performances, although her best-known performance would continue to be in Ecstasy (1933), largely because of her then-daring nude scenes.

Critic Reviews for The Strange Woman

Audience Reviews for The Strange Woman