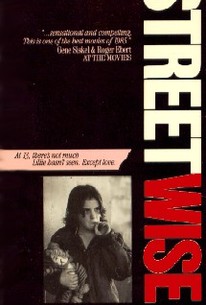 This sobering documentary on the lives of several teen outcasts living on the streets of Seattle was nominated for an Academy Award in 1985 because of its content and what it reveals about this sad substrata of urban culture. While interviews with the teens show they are dreaming of making it big and living free, their reality and their naive bravado lend a pathos to their existence that is difficult to behold. Adult viewers will be well aware that their chances for survival are low, and their chances of staying out of prison worse. Rat is a 17-year-old petty criminal who would like to go back to school or join the army, though these statements are not exactly convincing. Among his friends are Dewayne, who visits his father in prison in a poignant scene; Tiny, a 14-year-old prostitute whose mother is in denial about her daughter; two other hookers, Kim (16 years old) and Shellie (13); and a 19-year-old lesbian who has a strong sense of self-preservation. The families of these teens have either thrown them out of the house or are otherwise alienated from their lives, and the only adults who enter the picture as supportive figures are social workers, doctors, and in some cases, the police themselves who do what they can to make life less difficult for the youngsters. No remedies are suggested to mend the situation, and no judgments made on the teens or their families.

There are no featured audience reviews for Streetwise at this time.