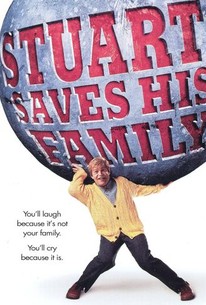 Al Franken brings his Saturday Night Live character Stuart Smalley to the big screen in this unexpectedly downbeat comedy about a man desperately trying to overcome his dysfunctional upbringing. Stuart hosts a TV show on public access TV in which he offers bits of New Age wisdom on self-help, often incorporating his trademark affirmation, "I'm good enough, I'm smart enough, and doggone it, people like me!" Too bad Stuart's advice doesn't work so well for himself; he barely supports himself as a waiter, his self-esteem is shaky at best, and his family is dominated by depressive alcoholics sunk in denial (for all his quirks, Stuart is the only Smalley willing to admit he has a problem). One day, Stuart's friend Julia (Laura San Giacomo) tells him that a cable network is looking for programming, and suggests he should pitch his show to them. Soon Stuart has a nationwide audience and is actually able to support himself, but that's small comfort when his family falls into another crisis. By turns a goofy comedy and a serious look at a dysfunctional family, Stuart Saves His Family does feature a few strong dramatic performances by Laura San Giacomo, Vincent D'Onofrio and Shirley Knight, and a distinctive comic turn by Julia Sweeney as a guest on Stuart's show.

Rachel Miller
as Woman with Subpoena

Rogan Wilde
as Ted
View All