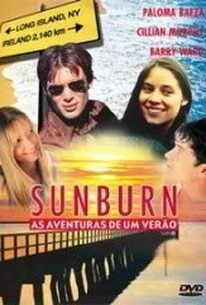 A group of Irish college students are about to leave for the United States, where they've landed summer jobs in Long Island, when a slightly shady friend of one of the gang, Davin (Cillian Murphy), decides to tag along as a quick way out of a doomed romance. While the students all have jobs and working papers lined up, Davin is an illegal alien in the States. But he leads a charmed life, and manages to get by quite nicely, even finding an American sweetheart, a cab dispatcher named Aideen (Paloma Baeza). Robert (Barry Ward), meanwhile, gets more from his job than he expected when he serves as a houseboy for a well-to-do artist named Carolyn (Ingeborga Dapkunaite). The rest of the group works hard in the day and plays even harder at night, as they relish the opportunity to enjoy adult life far from the eyes of their families. Sunburn marked the feature debut for director Nelson Hume; it was produced by Jean Doumanian, who produced a number of films for Woody Allen and briefly produced the TV series Saturday Night Live.

There are no critic reviews yet for Sunburn. Keep checking Rotten Tomatoes for updates!