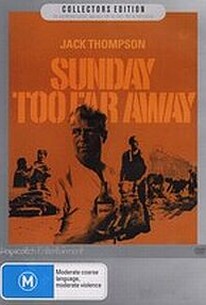 Sunday Too Far Away

Sunday Too Far Away Photos

Director Ken Hamman's breakthrough historical drama was the first Australian film of the 1970s to gain international acclaim, paving the way for the Australian New Wave and the success of movies such as The Last Wave and Breaker Morant. Sunday Too Far Away is a story about the struggles of itinerant sheep shearers in the Outback in the 1950s. Jack Thompson won an Australian Best Actor prize for his role as Foley, a hard-drinking, hard-working shearer who is the best at his profession. When local landowners try to drive away the sheep herders, Foley leads a strike to establish their right to exist and live off the land. The dispute turns violent as the landowners retaliate, and Foley struggles to maintain his supremacy. Many scenes were shot in the same shearing barn used in the 1960 British-Australian hit The Sundowners, which was about an Irish sheepherder who emigrates to Australia. The title comes from a traditional song of complaint sung by sheep shearers' wives. The film became a sensation at the Cannes Film Festival. ~ Michael Betzold, Rovi

Ken Shorter
as Davis
View All

Critic Reviews for Sunday Too Far Away

Audience Reviews for Sunday Too Far Away

Sunday Too Far Away Quotes