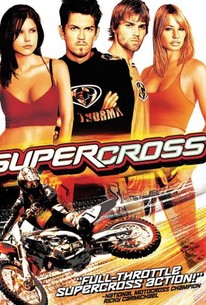 While it showcases some cool stunts, Supercross feels like an infomercial for its titular sport, with undeveloped characters and a shopworn plot.

Two siblings find themselves competing on and off the racetrack in this action-packed drama. K.C. Carlyle (Steve Howey) and his kid brother, Trip (Mike Vogel), are both racers in the rough and tumble world of supercross, a revved-up variation on motocross racing in which specially modified motorcycle negotiate specially built dirt tracks that send riders through tricky twists and turns, over rough terrain, and off high-flying jumps. Both are talented racers, but K.C. has a wilder and more reckless approach, while Trip follows a more cautious path. A more profound difference between them arises when K.C. is offered a lucrative deal to ride for a factory-sponsored team; he takes the deal, and leaves his brother behind to race on his own dime. However, when an accident takes Trip out of the running on the supercross circuit, he and K.C. set aside their differences as Trip helps coach his older brother so he can succeed in his drive to the championship. Made with the cooperation of a leading supercross race promoter, Supercross: The Movie also stars Sophia Bush and Cameron Richardson as the brothers' love interests, and Robert Carradine as a determined race coach.

Little Jamie Watts
as Herself

Terry Boyd
as Himself

Erin Bates
as Herself

Tyler Evans
as Himself

Ricky Johnson
as Himself
View All