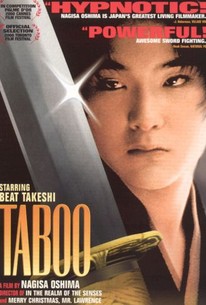 After a 13-year absence, partially due to a life-threatening stroke, master filmmaker Nagisa Oshima returns to the silver screen with this revisionist samurai epic. From his first major film, Cruel Story of Youth to his most notorious work Ai no Korrida, Oshima has coupled the political and the sexual in a manner that transgresses all social norms. In this film, Oshima explores homosexuality among the ranks of the much hallowed samurai. The film is set in Kyoto in 1865 during a critical moment of Japanese history--the country's 300-year-long self-imposed isolation was coming to an abrupt halt leading to the end of the Shogunate. In its place came a more internationally-minded government with the Emperor as its nominal head. Feeling both their traditions and their grip on power threatened, samurai militia sprang up throughout the country to fight this foreign encroachment. One such group, the Shinsengumi, is auditioning new recruits at the film's opening. Commander Kondo (Yoichi Sai) and Captain Hijikata (Takeshi Kitano, a renowned filmmaker in his own right) select the ruggedly handsome Tashiro (cult actor Tadanobu Asano) and Kano (Ryuhei Matsuda), an effeminate lad with long locks and a thirst for blood. Worried about the perceived slightness of the latter, Kondo and Hijikata order Kano to perform an execution, which he does with grim aplomb. The lad's androgynous beauty soon raises the general blood pressure of the militia. While Tashiro snuggles up with him nightly, Hijikata, who suspects that something other than manly appreciation is going on between the two neophytes, also seems unduly interested in the youth. This film was screened in competition at the 2000 Cannes Film Festival.

Uno Kanda
as The Geisha Nishikigi-dayu

Kazuko Yoshiyuki
as The Servant Omatsu

Kei Sato
as Narrator
View All