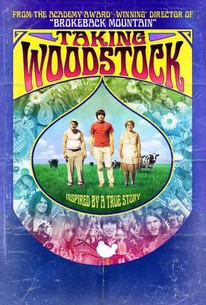 Featuring numerous 60s-era clichés, but little of the musical magic that highlighted the famous festival, Taking Woodstock is a breezy but underwhelming portrayal.

It's 1969, and Elliot Tiber, a down-on-his-luck interior designer in Greenwich Village, New York, has to move back upstate to help his parents run their dilapidated Catskills motel, The El Monaco. The bank's about to foreclose; his father wants to burn the place down, but hasn't paid the insurance; and Elliot is still figuring how to come out to his parents. When Elliot hears that a neighboring town has pulled the permit on a hippie music festival, he calls the producers, thinking he could drum up some much-needed business for the motel. Three weeks later, half a million people are on their way to his neighbor's farm in White Lake, N.Y., and Elliot finds himself swept up in a generation-defining experience that would change his life, and American culture, forever. The film features a standout ensemble cast and songs from a score of '60s musical icons, including The Grateful Dead, The Doors, Jefferson Airplane and Country Joe and the Fish -- plus a new recording of "Freedom" from Richie Havens.

Will Janowitz
as Chip Monck

Andrew Katz
as Hippie in Line

Alyssa May Gold
as Young Girl at Phone