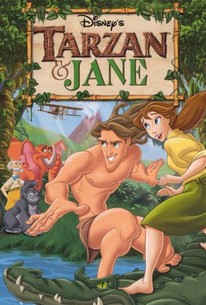 Even when you're the King of the Jungle, you don't want to forget your anniversary with your significant other, as taught in this direct-to-video sequel to the 1999 Disney animated adventure Tarzan. Tarzan (voice of Michael T. Weiss) and Jane (voice of Olivia d'Abo) are soon to celebrate their first anniversary together, and as the two find themselves looking back on the ups and downs of the past year, Jane decides she wants to get something special for Tarzan to mark the occasion. But Jane has a hard time deciding just what the special gift should be, and even their animal friends Terk the Gorilla (voice of April Winchell) and Tantor the Elephant (voice of Jim Cummings) are short on gift ideas. As it turns out, it's Tarzan who has the big surprise for Jane, as he plans something special to show how he's come to understand the life she left behind to be with him. Tarzan and Jane also features a new recording of the song "Two Worlds," written for the 1999 film Tarzan, and here performed by the song's composer, Phil Collins, with teen pop star Mandy Moore.

April Winchell
as Terk the Gorilla

Jim Cummings
as Tantor the Elephant

Nicollette Sheridan
as Eleanor
View All