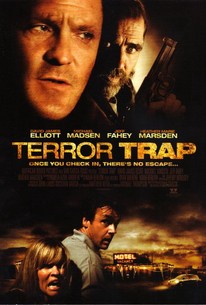 A young couple checks into a remote Louisiana motel, and realizes they may never check out in this nightmarish shocker featuring Michael Madsen and Jeff Fahey. Don (David James Elliot) and Nancy (Heather Marsden) are traveling down a lonely stretch of road late one night when a car appears out of the darkness, and crashes right into them. Stranded, they phone the local police for help, and the Sheriff (Fahey) directs them to a nearby motel where they can stay overnight, until the local repair shop opens the following morning. Unfortunately for the weary couple, their nightmare has only just begun. The owner of the motel is a man named Carter (Madsen) who makes his living on blood money, and controls everything that goes on in the backwoods town. It was no coincidence that the Sheriff brought Don and Nancy to Carter's hotel, because that's where the locals go to get their sick thrills. Soon after the young couple checks in, they come under attack from a gang of brutal killers who slaughter stranded travelers for fun. Now, if Don and Nancy can make it to the parking lot, they can simply drive away. But no one before them has ever made it out alive, and the closer it gets to dawn, the more it begins to look as they won't be the first to break the bloody tradition. ~ Jason Buchanan, Rovi

There are no critic reviews yet for Terror Trap. Keep checking Rotten Tomatoes for updates!