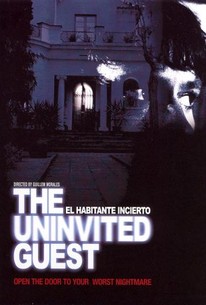 A lonely architect who was recently abandoned by his live-in girlfriend finds that he's not as alone in his sprawling estate as he had previously thought in director Guillem Morales' minimalist thriller. Félix's (Andoni Gracia) girlfriend, Vera (Mónica López), may be gone, but her possessions, scattered about the house as if she were to walk back through the door at any moment, offer a constant reminder of the failed relationship that he was powerless to salvage. When a desperate stranger who introduces himself as Martin (Agustín Villaronga) shows up on Félix's doorstep begging to make an urgent telephone call, the startled homeowner reluctantly allows the man inside only to realize that his strange guest has seemingly vanished into thin air just moments later. Now convinced that the mysterious Martin is hiding somewhere in his home undetected, Félix's growing paranoia leads him down a dark path in which his home seems to take on its own increasingly menacing personality.

Agustí Villaronga
as Martin
View All

There are no critic reviews yet for The Uncertain Guest (El Habitante incierto) (The Uninvited Guest). Keep checking Rotten Tomatoes for updates!