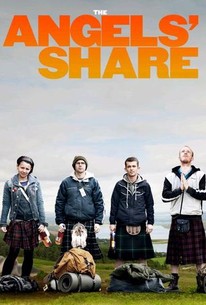 The Angels' Share is a surprisingly delightful, uplifting comedy that successfully blends a charming story of redemption with bits of dark humor and a social message.

Winner of the Jury Prize at the Cannes Film festival, legendary director Ken Loach , one of Britain's most distinguished and respected filmmakers, who makes tough, uncompromising films about a beleaguered working class with poetry and humor, and longtime writing partner Paul Laverty (The Wind that Shakes the Barley, Bread and Roses and My Name is Joe), present an engagingly off-kilter new film, The Angels' Share. Robbie, a young ne'er do well (Paul Brannigan), a broke new father with a good heart is in serious trouble with the law. When he holds his newborn son for the first time, roguish Robbie is determined that the boy will have a better life, one with more opportunities than he has been offered in this insular, blue collar world. But first Robbie must sort out a variety of pressing problems --his girlfriend's family wants to do him harm and run him out of town being first and foremost among them. He is given a lucky break by a judge who shows mercy, granting him community service instead of jail. Here he meets Rhino, Albert and Mo, former petty criminals also down on their luck. (c) IFC Films

Jim Sweeney
as Policeman #1
View All

Critics Consensus: 42 Is Earnest and Inspirational
View All

There are no critic reviews yet for The Angels' Share. Keep checking Rotten Tomatoes for updates!