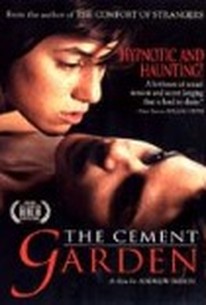 Ian McEwan's disturbing novel is given a chilly shimmer in this film adaptation by Andrew Birkin. The film takes place in a concrete slab of a house situated on the outskirts of an English town. The father (Hanns Zischer) is a consumptive creep, while the mother (Sinead Cusack) is a sweet and understanding matriarch. When the father dies of a heart attack after his garden is paved over, it is too much for the mother to bear, and after a few weeks she wastes away and also dies. This leaves the children to fend for themselves. The eldest sister and brother, Julie (Charlotte Gainsbourg) and Jack (Andrew Robertson), have to care for the younger children, Sue (Alice Coultard) and Tom (Ned Birkin). Without parental supervision, the four children give themselves up to their secret longings. Jack hides in corners to masturbate, but Julie uses her sexual attraction to lure Jack into an incestuous relationship. Even the younger children have their problems: Sue is mostly mute and spends all her time obsessively writing in her journal, while Tom feels that deep inside himself he is a girl trapped in a boy's body. The children hide the mother's remains in the basement and live off her bank account. The neighbors don't suspect a thing --that is until sleazy Derek (Jochen Horst) begins to come around in his red convertible, trying to get a date with Julie. ~ Paul Brenner, Rovi

Critic Reviews for The Cement Garden

Audience Reviews for The Cement Garden