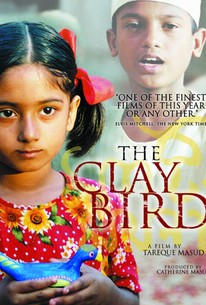 The Clay Bird takes a tenderly observed look at one family's experiences -- and offers subtly impactful observations about Bangladeshi history in the bargain.

The Clay Bird takes place in the late '60s, in East Pakistan, on the eve of a violent revolution that created the independent state of Bangladesh. Anu (Nurul Islam Bablu) lives with his fundamentalist Muslim father, Kazi (Jayanto Chattopadhyay), who practices homeopathic medicine. Anu's mother, Ayesha (Rokeya Prachy) was once a spirited girl, but she's become sullen in subservience to her increasingly taciturn husband. Anu also has a sweet but sickly little sister, Asma. Milon, Kazi's younger brother, is involved in local politics, protesting against Pakistan's military rule. He also takes Anu to the lively local Hindu festivals. Finally, worried for his son's spirituality, Kazi sends Anu away to a madrasah , a strict Muslim boarding school. There, the sweetly inquisitive boy is an outcast, so he befriends another outcast, Rokon (Russell Farazi), who invites him to play catch with an imaginary ball. (In the strict teachings of the madrasah, the boys are not allowed to employ objects or boundaries in their play.) As Anu adjusts to life away from home, Asma grows gravely ill, and Ayesha is frustrated by Kazi's refusal to use modern medicine. The family has its own internal crisis as the political upheaval around them reaches a deadly level. Director Tareque Masud, who wrote the script with his wife, Catherine Masud, who also edited the film, has a background in documentary filmmaking. The Clay Bird, his first narrative feature, won a FIPRESCI Award at the 2002 Cannes Film Festival and was shown at New Directors/New Films in 2003. It was also the first film officially submitted by Bangladesh for Oscar consideration.

Rokeya Prachy
as Ayesha
View All

There are no featured audience reviews for The Clay Bird (Matir moina) at this time.