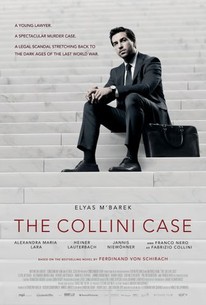 THE COLLINI CASE centers on lawyer Caspar Leinen (Elyas M'Barek, Who Am I), who is confronted with a spectacular case when he is appointed by the court to defend 70-year-old German-Italian Fabrizio Collini (international screen icon Franco Nero), who has killed respected industrial magnate Hans Meyer (Manfred Zapatka, The Himmler Project) in his hotel suite, seemingly without motive. For Caspar, there is much more at stake than his first big case as a defense lawyer. The victim was the grandfather of his childhood sweetheart, Johanna (Alexandra Maria Lara, Doctor Zhivago), and was a surrogate father to him in his youth. In addition, Caspar has an adversary in his former criminal law professor and legendary defense lawyer Richard Mattinger (Heiner Lauterbach, Granny Nanny), who has been appointed the joint plaintiff representative. The case quickly becomes a high-profile event, as Collini refuses to divulge his reason for killing Meyer. As Caspar dives deeper and deeper into the case, he not only is confronted with the troubled past of the family he thought he knew so well, but he also uncovers one of the biggest judicial scandals in German history.

Critic Reviews for The Collini Case

Audience Reviews for The Collini Case

There are no featured audience reviews for The Collini Case at this time.