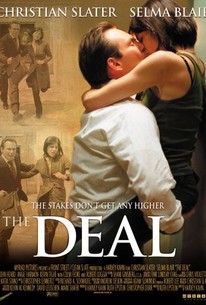 Dense with detail but light on entertainment value, The Deal turns a potentially riveting subject into a sloppily assembled -- and progressively more implausible -- misfire.

Money and power bring major corruption to the world's energy marketplace in this taut political drama. After a long war between the United States and a coalition of Middle Eastern nations leads to a gap in the flow of multinational oil trading, the price of gasoline in America shoots past six dollars a gallon and both the energy industry and the stock market are walking on thin ice. In the midst of this instability, Tom Hansen (Christian Slater), a leading advisor at of one Wall Street's top firms, is looking to hire new talent to help with his latest client, Condor Oil and Gas. Condor's CEO, Jared Tolson (Robert Loggia) used to employ Tom's best friend until the younger man died in a mysterious accident, and Tom is eager to do what he can for Jared. Tom hires Abbey Gallagher (Selma Blair) to assist with the Condor account; Abbey is a passionate environmental activist who is wary of associating herself with a major energy firm, but her mentor Prof. Roseman (John Heard) persuades her she can be an advocate for green concerns on the inside. As Tom and Abbey spend more time together, they become romantically drawn to one another, but Tom's love for her puts Abbey in great danger when she finds out what he knows about illegal oil trading operations and money laundering schemes that link Condor with the Russian Mafia. The Deal also stars Colm Feore, Angie Harmon, and Françoise Yip.

Critic Reviews for The Deal

Audience Reviews for The Deal

There are no featured audience reviews for The Deal at this time.