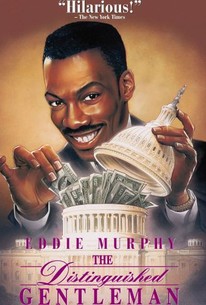 A smooth-talking confidence trickster makes his way into congress (where the cynical would suggest he'd have plenty of company) in this comedy. Thomas Jefferson Johnson (Eddie Murphy) is a con man from Florida who gets the bright idea that a scam artist could make a tidy sum if he was able to get inside the political arena. When a Florida congressman named Jeff Johnson dies and a special election is held to replace him, Thomas puts his name on the ballot as "Jeff Johnson," and enough confused voters check the ballot for him that he wins the race and is on his way to Washington D.C. Johnson soon finds a mentor in Dick Dodge (Lane Smith), chairman of the Power and Industry Committee, who shows Johnson the ropes on raking in PAC money while the late Mr. Johnson's aide, Reinhardt (Grant Shaud), gives him the inside scoop on how things work in Washington. Johnson's plans are going just as he hoped until he meets Celia Kirby (Victoria Rowell), a volunteer lobbyist and political activist whose uncle is a noted religious leader, The Rev. Elijah Hawkins (Charles S. Dutton). Johnson quickly becomes smitten with Celia, but it's obvious that she's not buying his act, and if he wants to win her heart, he'll have to stop fooling people into thinking he's honest and actually be honest. Joe Don Baker and Sheryl Lee Ralph also co-star.

Tom Dahlgren
as Chief of Police

David A. Penhale
as Voting Husband

Critic Reviews for The Distinguished Gentleman

Audience Reviews for The Distinguished Gentleman