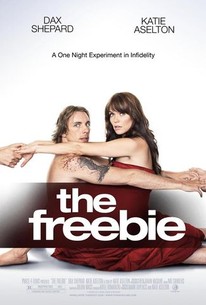 A couple hatches a highly dubious scheme to put the spark back in their marriage in this independent comedy drama. Annie (Katie Aselton) and Darren (Dax Shepard) have been married for seven years, and they love each other as much as the day they were wed; they're affectionate, have fun together, and enjoy games such as crossword puzzle races. They would seem to have a perfect relationship, except for one thing -- they haven't had sex in ages, and seem to have lost all interest in making love with one another, no matter how they try to put each other in the mood. Hoping to put some adventure back into their lives, Annie and Darren come up with an unusual idea -- they each get one night in which they're free to find someone and have sex with them, scot-free. But is this going to help their relationship, or is it just going to turn a small problem into a big problem? The Freebie was the first directorial assignment for actress Katie Aselton, who also plays Annie (and is married to another actor and filmmaker, Mark Duplass); the film was an official selection at the 2010 Sundance Film Festival.

News & Interviews for The Freebie

Critics Consensus: Easy A and The Town Are Certified Fresh
View All

Critic Reviews for The Freebie

Audience Reviews for The Freebie