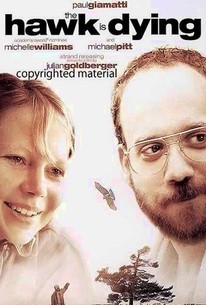 The Hawk Is Dying

Paul Giamatti lends his character some pathos, but The Hawk is Dying is otherwise too ambiguous and morose to be enjoyable.

The Hawk Is Dying Photos

A man channels his feelings through an obsession with wild birds in this independent drama based on a novel by Harry Crews. Fortysomething George Gattling (Paul Giamatti) is an emotionally stunted man who makes his living doing auto upholstery and lives with his sister, Precious (Rusty Schwimmer), and her autistic son, Fred (Michael Pitt). Though George has an on-and-off relationship with Betty (Michelle Williams), a constantly stoned young woman just edging out of her teens, one of the few ways in which his deeper feelings come to the surface is his interest in falcons. George loves to capture and train the birds, even if he isn't especially good at it and has lost nearly all the falcons he's tried to keep. When Fred dies in a drowning accident, his family is devastated, but George is incapable of expressing his grief. One day, George finds a striking red-tailed hawk, and he immediately becomes obsessed with the bird. As George struggles to keep the magnificent hawk in captivity and keep it safe while training it to obey his commands, he's finally able to connect with the sense of loss that has haunted him since Fred's passing. The Hawk Is Dying received its premiere at the 2006 Sundance Film Festival. ~ Mark Deming, Rovi

News & Interviews for The Hawk Is Dying

Critic Reviews for The Hawk Is Dying

Audience Reviews for The Hawk Is Dying

The Hawk Is Dying Quotes