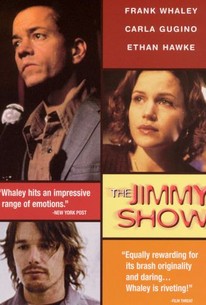 Following up on his directorial debut, Joe the King, actor-turned-sometimes director Frank Whaley made this gritty character study of a man consumed by anger. Working as a clerk at a supermarket, Jimmy (Whaley) makes it a practice to steal anything and everything he can get away with, usually cases of beer. At home, he supports his neglected wife (Carla Gugino), his infant daughter, and his foul-tempered invalid grandmother, whom he has been caring for since he was a teen. A compulsive complainer, Jimmy is vitriolically bitter about his lack of a childhood. His latest dream, one in a series of failed schemes to make it big, is to be a standup comedian. Yet Jimmy's idea of a schtick is less one-liners and gags than a prolonged confessional rant about his marriage, the loss of his parents, and his grandmother. As the film progresses, Jimmy's monologues grow darker and ever more sinister. This film was scheduled to be screened at the 2001 Toronto Film Festival.

George Demas
as Man in Club

William Peden
as Man in Club

Jefferson Breland
as Man in Club

Sam Stone
as Jimmy at 5

Critic Reviews for The Jimmy Show

Audience Reviews for The Jimmy Show