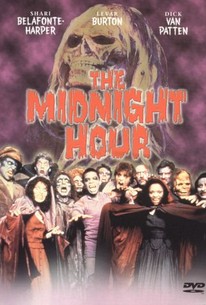 Inexplicably given the deluxe DVD collector's edition treatment by Anchor Bay, this silly TV-movie from the director of Child's Play 3 aired on ABC in 1985 in a clear attempt to capitalize on the success of the long-form music video "Thriller." A group of teenagers break into a museum in a small Massachusetts town in order to steal some authentic costumes for a graveyard Halloween party. Their blasphemous acts unleash a vampiric witch from the 1700s and a passel of zombies, leading to a number of hokey musical production numbers. The best thing about the film aside from some nice special effects by Tom Burman (Cat People) is the cast. Shari Belafonte and LeVar Burton become vampires, Kevin McCarthy turns into a zombie, and there are numerous recognizable faces like Dick Van Patten, Dedee Pfeiffer, and Mark Blankfield. The redoubtable Lee Harcourt Montgomery also shows up to prove that even years after his immortal dubbing as Worst Child Actor in The Golden Turkey Awards for his roles in Ben and Burnt Offerings, his acting abilities remain remarkably annoying. Cultists and completists may find it worth a look for camp value alone, but most will want to give it a wide berth.

Critic Reviews for The Midnight Hour

There are no critic reviews yet for The Midnight Hour. Keep checking Rotten Tomatoes for updates!

Audience Reviews for The Midnight Hour