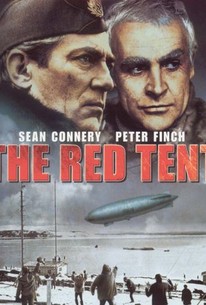 The true story of a tragic 1928 arctic expedition provides the basis for this adventure drama that was a joint Italian and Russian co-production. Peter Finch stars as General Umberto Nobile, who is visited in Rome by the ghosts of those whose lives were taken in his ill-fated mission forty years earlier. In flashback, Nobile recalls the attempt to cross the North Pole by flying dirigible, the Italia. When the airship crashes, Nobile and his crew are scattered across the ice, left to struggle against the freezing cold elements and local polar bears, among other hazards. In an effort to save the expedition, the great explorer Roald Amundsen (Sean Connery), the first man to reach the South Pole, is dispatched to rescue Nobile. When Amundsen disappears (never to be heard from again), an icebreaker is launched to bring national hero Nobile home, but at the expense of his crewmates. Although The Red Tent (1971) was considered a costly box office failure, the film did win a Golden Globe for Best English Language Foreign Film.

Boris Khmelnitskiy
as Viglieri
View All

News & Interviews for The Red Tent

Critic Reviews for The Red Tent

Audience Reviews for The Red Tent

There are no featured audience reviews for The Red Tent at this time.