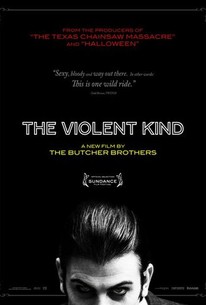 Bikers tangle with the spirits of the dead in this genre mashup from the writing and directing team the Butcher Brothers. Cody (Cory Knuaf) and Q (Bret Roberts) are a pair of outlaw bikers who are looking to lay low and have a few laughs after a deal with some drug runners takes a turn for the worse. Cody's mother will be celebrating her birthday soon, so he and Q hop on their hogs and head to Oakland for the festivities. The party turns out to be a major biker bash, with riders from far and wide represented, but when things start winding down, the evening takes a serious turn for the worse. A guest turns up dead, Cody's former girlfriend undergoes a terrible transformation and there's no way to call for help. As Cody and Q try to make sense of it all, the party is visited by the spirits of a deceased biker club from the 1950s, who are restless and looking to settle some scores. The Violent Kind received its world premiere as a special midnight attraction at the 2010 Sundance Film Festival.

Critic Reviews for The Violent Kind

Audience Reviews for The Violent Kind