The Water Is Wide 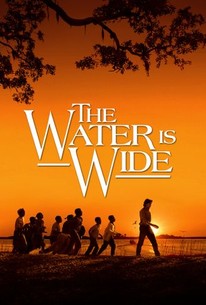 The Water Is Wide

The Water Is Wide Photos

This made-for-TV movie is a remake of the theatrical feature Conrack, using the original title of the source novel by Pat Conroy. Set in 1969, The Water Is Wide stars Jeff Hephner as Conroy, an idealistic young teacher whose first assignment is at a run-down school located on Yamacraw Island in South Carolina. The state's imperious school superintendent Henry Piedmont (Frank Langella) has written off the unkempt, illiterate black children of Yamacraw as thoroughly unteachable, while the school's authoritarian black principal Mrs. Brown (Alfre Woodard), evidently unwilling to buck the Anglo-Saxon establishment, insists that Conroy doggedly adhere to an established curriculum that has never worked with the students. Instead, Conroy utilizes compassion and humor as teaching tools, reaching out to his students through a variety of humanistic methods, including adopting the kids' own archaic Gullah dialect in order to teach them proper English. Not surprisingly, Mr. Piedmont and Mrs. Brown are dead set against Conroy's "radical" approach to teaching -- even when it is obviously working -- but fortunately, our hero has a strong ally in the form of deputy superintendent Bennington (James Murtaugh). Echoing elements from another Pat Conroy novel, The Great Santini, the young protagonist is plagued throughout the film by memories of his uncompromising Marine-officer father, who has instilled in Conroy a hatred (and fear) of all authority figures. Produced as part of CBS's Hallmark Hall of Fame series, The Water Is Wide was first broadcast on January 29, 2006.

Lynda A. Clark
as Lou Stone

Robert Clotworthy
as Narrator (Voice of Conroy's Father)
View All

Critic Reviews for The Water Is Wide

There are no critic reviews yet for The Water Is Wide. Keep checking Rotten Tomatoes for updates!

Audience Reviews for The Water Is Wide

There are no featured audience reviews for The Water Is Wide at this time.

The Water Is Wide Quotes