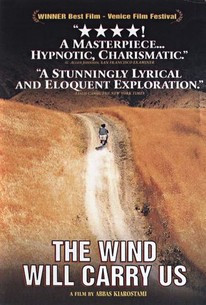 The Wind Will Carry Us

The Wind Will Carry Us slowly casts its transporting spell as writer-director Abbas Kiarostami explores ineffable themes with patience and grace.

The Wind Will Carry Us Ratings & Reviews Explanation

The Wind Will Carry Us Photos

This idiosyncratic drama from Iran begins as a jeep winds through the hills of Kurdistan, containing an engineer (Behzad Dourani) and his two assistants (whom we never see) as they search for a small village in the mountains. When they arrive, they are greeted by a young boy, who shows them a place they can stay and guides the engineer to the home of an old woman (also never seen) who seems to be dying. No one is sure what the engineer and his men are doing there; some locals think he's keeping watch of the old woman and wants to purchase her land when she dies, while others think he could be an archeologist searching for rare artifacts. Meanwhile, the engineer spends his days exploring the village and the people who live there -- most of them women, with the men away at jobs that occupy them night and day for several months out of the year. He also stays in touch with the boy, who watches over the old woman's health while keeping up with his schoolwork, working on his family's farm, and helping his mother with the household chores. Meanwhile, the engineer periodically gets calls on his cellular phone, which require him to drive to a graveyard on a hill to receive the call (most, however, are wrong numbers), while making contact with a man digging a deep hole (also unseen) and a girl in the village who milk's cows which are kept in a dark basement. Concentrating on what we don't see as often as what we do, Le Vent Nous Emportera bears the distinctive stamp of director Abbas Kiarostami and was embraced by critics in its screening at the 1999 Venice Film Festival. ~ Mark Deming, Rovi

The Inhabitants of the Siah Dareh village

Critic Reviews for The Wind Will Carry Us

Audience Reviews for The Wind Will Carry Us

The Wind Will Carry Us Quotes