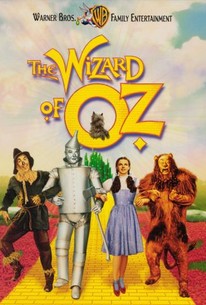 The Wizard of Oz

Although slightly more entertaining than its reputation, this silent slapstick version of L. Frank Baum's classic fairy tale is still not very good. Granted, producer/director/star Larry Semon had a great eye for the grotesque (he was, after all, a former cartoonist), but for some reason the veteran comedian chose to almost completely ignore Baum's original story -- and that after hiring the author's son, L. Frank Baum Jr. as one of his writers. In Semon's hands, the Merry Old Land of Oz exists somewhere east of Graustark and is inhabited by operetta-style cardboard characters named Prime Minister Kruel (Josef Swickard), Countess Vishuss (Virginia Pearson), Ambassador Wikked (Otto Lederer), Prince Kynd (Bryant Washburn), and the contender, Dorothea, having been kidnapped as a child. Meanwhile, back in Kansas, Dorothy (Dorothy Dwan) is about to learn how she was dumped as an infant on the doorstep of Aunt Em (Mary Carr) and Uncle Henry (Frank "Fatty" Alexander). After a great many reworkings of old Semon gags, the famous twister blows Dorothy, her obese uncle, and three farm hands (Semon, Oliver Hardy, and Spencer Bell) right back to Oz where they land at the feet of power hungry Prime Minister Kruel. Oz, of course, has its Wizard (Charlie Murray), and although he is a big humbug of a medicine showman, the Wiz saves the day for all and sundry. Semon, who had the word "restraint" cut out of his vocabulary, threw everything and the kitchen sink into this his proposed masterpiece, including lots of extras in fanciful costumes, quite a few potent special effects, and a Dorothy (Mrs. Semon in real life) who was perhaps more +Ziegfeld Follies than Kansas. Just like in the later MGM classic, the farm hands turn into Baum's famous characters but only briefly and without much enthusiasm. Semon himself is only fully done up as the Scarecrow for a couple of minutes and Babe Hardy is the Tin Woodsman even less time than that. But at least their transformation is somewhat explained. African-American comedian Spencer Bell, on the other hand, dons a lion costume for no apparent reason other than to prove that all three characters from the book appear in the film as well. A veteran Semon collaborator, Bell is billed G. Howe Black (get it?) this time around and to compound matters is introduced eating a watermelon. Another low point comes earlier in the film with the introduction of the "Phantom in the Basket," an outrageous female impersonator (Frederick Ko Vert), all decked out in ostrich plumes and flirting with a visibly uncomfortable Bryant Washburn. Released by Poverty Row company Chadwick Pictures, The Wizard of Oz was awarded a first-class premiere at Los Angeles' Fortune Theater and then road-shown in the rest of the country. Although praised for its lavish production values, the film was not the anticipated success at the box office and proved the beginning of the end for Semon, a comedian whose salary at one time had almost rivalled that of Chaplin.

Oliver Hardy
as The Tin Woodsman

Charles Murray
as The Wizard

Critic Reviews for The Wizard of Oz

Audience Reviews for The Wizard of Oz

The Wizard of Oz Quotes