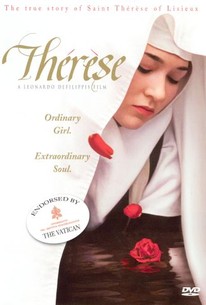 Thérèse Martin was born in 1873 to a working-class family in France. When Thérèse was only four years old, her mother died, sending the child into a cycle of depression. When she was 14, Thérèse experienced a spiritual epiphany and decided to devote her life to God; she wanted to become a Carmelite nun, and when she was told she was too young, she traveled to the Vatican and personally appealed to the Pope to allow her to join the order. Entering the monastery at a time when winds of intellectual and spiritual change were sweeping the world, Thérèse came to see the simple but sublime life of the nuns as an inspired path to spiritual contentment, and she wrote a powerful book about her religious awakening, The Story of a Soul. Published a year after her tragic death in 1897, Thérèse de Lisieux's autobiography gained widespread acclaim, and the girl known as "the Little Flower" was canonized as a saint in 1925. Thérèse is a feature film that tells the story of Thérèse de Lisieux's life and work, with Lindsay Younce in the title role; it is the first feature film for Leonardo Defilippis, an experienced actor and theatrical director.

There are no featured audience reviews for Thérèse at this time.