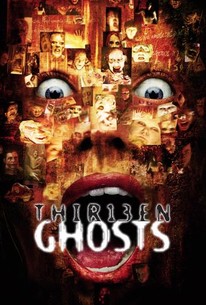 The production design is first rate, but 13 Ghosts is distinctly lacking in scares.

This haunted house chiller is the second feature from Dark Castle Entertainment, the mid-budget outfit put together in 1999 to remake the cheesy horror genre pictures of William Castle by his daughter Terry Castle. Down on his luck, the broke Arthur (Tony Shalhoub) is grateful when he learns that his eccentric, recently deceased uncle willed him his lavish home. Arthur and his daughter Kathy (Shannon Elizabeth) move into the odd house only to discover that its elaborate series of moving glass walls exists to contain 13 spirits trapped within. It seems that Zorba was a collector of paranormal entities, but the supernatural spooks want out, while an alleged hidden fortune keeps the new owners, as well as some fellow treasure seekers and a veteran ghost hunter locked inside. Thirteen Ghosts (2001) co-stars F. Murray Abraham, Embeth Davidtz, and Matthew Lillard.

Daniel Wesley
as The Torso

John De Santis
as The Juggernaut

Herbert Duncanson
as The Hammer

Shawna Loyer
as The Angry Princess

Laura Mennell
as The Bound Woman

Craig Olejnik
as The Torn Prince

Xantha Radley
as The Pilgrimess

Laurie Soper
as The Dire Mother

Shayne Wyler
as The Jackal

14 Rotten Horror Movies We Love
Sequel Buzz on "Haunted Hill" and "Fast and the Furious"?
Who Wants ANOTHER Slice of "American Pie"?
View All