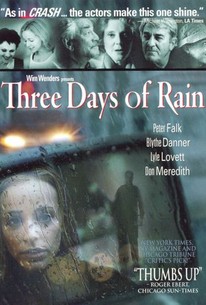 Writer/director Michael Meredith's ambitious first feature, Three Days of Rain, weaves together a large number of tales, loosely based on short stories by Anton Chekhov, and set in present-day Cleveland. Thunder (Michael Santoro) is a struggling tile-maker, an artisan whose leaky roof threatens to destroy his business and his life. Denis (Joey Bilow) is a mentally impaired railroad worker who finds his job in jeopardy when a co-worker, Jim (Chuck Cooper), questions his competence. Tess (Merle Kennedy) is a drug-addled young woman who performs sexual favors for a sleazy judge in order to visit the young daughter of whom she's lost custody. Waldo (Peter Falk) is an old rummy who repeatedly manipulates his caring son, Michael (Bill Stockton, who also produced the film), and then apologizes for doing so. Alex (Erick Avari of The Mummy) begins to question everything about his life after an encounter with a homeless veteran. A cab driver, John (Don Meredith), tells everyone who will listen about the recent death of his son. Through it all runs the commentary of a disc jockey (Lyle Lovett), who plays the smooth jazz that comprises the film's soundtrack. Three Days of Rain came to the attention of Wim Wenders through an editor on the project, Peter Przygodda, and Wenders, impressed with Meredith's work, became involved with the film. Three Days of Rain was shown in competition at the 2002 Tribeca Film Festival. The film features cameos by Blythe Danner, Jason Patric, Max Perlich, Wayne Rogers (of M*A*S*H fame), and avant-garde filmmaker George Kuchar.

There are no featured audience reviews for Three Days of Rain at this time.