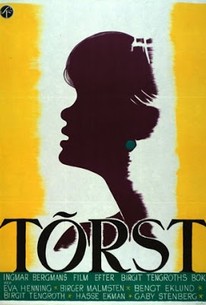 A couple's relationship begin to unravel during a rail trip through Europe in this drama, an early work from legendary Swedish filmmaker Ingmar Bergman. Rut (Eva Henning) is a former ballet dancer whose career has been sidelined due to an injured knee, while her husband Bertil (Birger Malmsten) is a slightly prickly academic. Rut and Bertil are traveling though Germany from Switzerland while their friends at home are celebrating the rowdy annual observance of Midsummer; much of Europe is still mired in poverty and disarray in the wake of World War II, and their vacation generates more tension between the two than positive feelings. As the couple's train rolls through the ravaged nation, flashbacks introduce us to other characters in the drama -- Raoul (Bengt Eklund), a military officer with no conscience who has an affair with Rut, and Viola (Birgit Tengroth), a friend of Rut from her days in dancing school who had a fling with Bertil and has fallen into a deep depression over her romantic and sexual confusion. Torst (aka Thirst) was adapted from a short story by Birgit Tengroth, who also appeared in the film as Viola. ~ Mark Deming, Rovi

Birger Malmsten
as Bertil her husband

Gaby Stenberg
as Astrid his wife

Ingmar Bergman
as Passenger on train

Sif Ruud
as Widow
View All