Till the Clouds Roll By 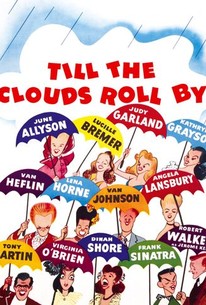 Till the Clouds Roll By

Till the Clouds Roll By Ratings & Reviews Explanation

Till the Clouds Roll By Photos

MGM's Till the Clouds Roll By is the musicalized, and highly fictionalized, life story of beloved composer Jerome Kern, who gave his blessing to the production shortly before his death in 1946. As played by a gray-templed Robert Walker, Kern is a likeable but none too exciting sort who expresses his emotions through his music. Constructed in the form of an extended flashback, the story proper begins at the turn of the century, as Kern tries to peddle his ditties to disinterested Broadway producers. His efforts to interest impresario Charles Frohman (Harry Hayden) go nowhere because Frohman is convinced that the only good music comes from Europe. Obligingly, Kern moves to London, where he meets and falls in love with his future wife Eva (Dorothy Patrick). On the verge of securing work with Frohman, Kern's hopes are dashed when the producer goes down with the Lusitania in 1915. Fortunately, Kern has developed such powerful U.S. contacts as Victor Herbert (Paul Maxey) and Oscar Hammerstein (Paul Langton), enabling him to find success as the composer of several "intimate" musicals for New York's Princess Theater. The film ends where it begins, with Kern's triumph as composer of the Broadway blockbuster +Show Boat. Van Heflin weaves in and out of the proceedings as the obligatory best friend/severest critic, a musical arranger named Jim Hessler (purportedly based on longtime Kern associate Paul Sadler). No one in 1946 really cared about the dramatic passages of Till the Clouds Roll By; the film's biggest drawing card was its lineup of all-star MGM talent, performing Kern's most famous numbers. Judy Garland (as Marilyn Miller) sings "Look for the Silver Lining"; Dinah Shore performs "The Last Time I Saw Paris" before a back-projected "Gay Paree"; Kathryn Grayson does a Rita Hayworth imitation with "Long Ago and Far Away"; Virginia O'Brien deadpans "A Fine Romance"; Tony Martin warbles "All the Things You Are"; June Allyson and Ray McDonald team up for the title number; and Frank Sinatra, incongruously dressed in white tuxedo, runs through "Ol' Man River." In addition, other musical contributions are made by Van Johnson, Angela Lansbury, Cyd Charisse, Gower Champion, and Lucille Bremer (cast as Van Heflin's daughter). The film's high point comes at the very beginning with a Reader's Digest edition of +Show Boat, featuring Lena Horne, as Julie (the role she was born to play, but never did again on screen), delivering a powerhouse rendition of "Can't Help Lovin' Dat Man." Since lapsing into public domain in 1974, Till the Clouds Roll By has, along with Royal Wedding, become the most readily accessible of all MGM musicals.

Joan Wells
as Sally as a girl

Van Heflin
as James I. Hessler

Critic Reviews for Till the Clouds Roll By

Audience Reviews for Till the Clouds Roll By

Till the Clouds Roll By Quotes