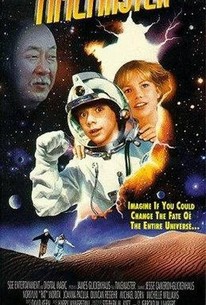 A young boy turns out to be Earth's last line of defense against an alien threat in this satiric sci-fi adventure. In the year 2007, an advanced alien civilization has learned how to manipulate human beings as part of a strange game called "Earth" that they play for their own amusement. The Chairman (Michael Dorn), leader of the alien tribes, has decided to up the ante and see if he can trick the people of Earth into destroying their own planet with nuclear weapons; as part of his scheme, the Chairman abducts a family and spirits them off to his planet, leaving their young son, Jesse (Jesse Cameron-Glickenhaus), behind by mistake. Jesse knows his parents have been stolen by aliens, and is certain they're up to no good, but he has a hard time convincing anyone of this except for Isaiah (Noriyuki "Pat" Morita), a local eccentric who lives in a shack on the outskirts of town. However, it turns out Jesse found just the right person: It seems Isaiah is actually an alien who has exiled himself to Earth rather than participate in the games, and he soon gives Jesse a crash course on who is being manipulated and how to fight back. Timemaster also features Joanna Pacula, Duncan Regehr, and wrestling commentators "Mean" Gene Okerlund, and Bobby "the Brain" Heenan.

Michael Dorn
as Chairman of the Universe

Scott Colomby
as The Gambler

George Pilgrim
as Billy The Kid

Bobby "The Brain" Heenan
as Howard

There are no featured audience reviews for Timemaster at this time.