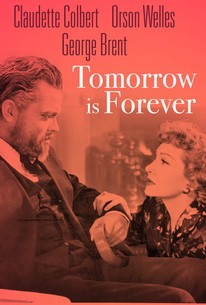 Tomorrow is Forever was adapted by Lenore Coffee from the novel by Gwen Bristow. The blissful marriage between John (Orson Welles) and Elizabeth (Claudette Colbert) comes to an abrupt end when John is listed as missing and presumed dead in WWI. After a respectable period of mourning, Elizabeth, now a single mother, marries chemical-plant executive Larry Hamilton (George Brent), by whom she has a daughter, Margaret (Natalie Wood, in her first major film role). Twenty years later, a refugee Austrian chemist named Erich Kessler is hired by Hamilton. Kessler turns out to be the long-missing John, now suffering from amnesia, his face completely reconstructed by plastic surgery. Upon ascertaining Kessler's true identity, Elizabeth is faced with the sort of devastating dilemma indigenous to glossy soap operas of this nature. The film's central conflict arises from John/Erich's opposition to his grown son Drew's (Richard Long) participation in WW2. At the time of the film's release, publicists for Tomorrow is Forever paid more attention to Claudette Colbert's 18 costume changes than to Orson Welles' virtuoso performance in what amounted to a dual role.

Thomas Louden
as Englishman on Ship

Thomas Lockyear
as Englishman on ship

Jessie Grayson
as Servant
View All

Critic Reviews for Tomorrow Is Forever

Audience Reviews for Tomorrow Is Forever