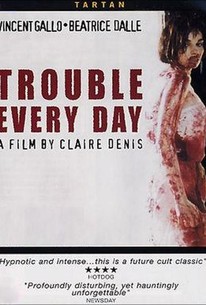 Two strangers share a strange and terrible bond in this stylish horror tale that juggles sex and graphic bloodshed. Shane Brown (Vincent Gallo) is a strange man with a forbidding nature who has just married lovely but nervous June (Tricia Vessey), and they've decided to go to Paris for their honeymoon. In the City of Lights, a beautiful but dangerous woman named Core (Beatrice Dalle) has been leaving a trail of dead bodies in her wake when she's captured by Leo Semeneau (Alex Descas), a mysterious scientist who spirits her away to his estate. As Core is placed under guard, Semeneau leaves to return to the city for an unnamed assignment; we soon learn that one of Shane's reasons for coming to Paris was to find him and retrieve some important information. In time, we also discover that Shane and Core have something rather unusual in common -- both are murderous cannibals who regularly feast on the flesh of their victims, and Semeneau's information may hold the key to the secret behind their deadly appetite. Trouble Every Day generated a certain amount of controversy in its screenings at the 2001 Cannes Film Festival, where a number of patrons walked out in disgust at the film's intense blend of sensuality and cannibalism.

Celine Samie
as Woman in Bra

Arnaud Churin
as Friend of Christelle's

Véra Chidyvar
as Woman on Train

Myriam Theodoresco
as One of the Lovers