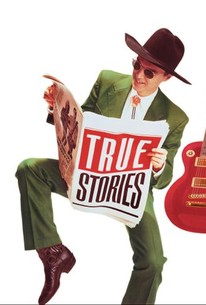 Its kitschy leanings may wear thin on some, but True Stories is a disarmingly big-hearted, dreamy vision of Americana.

Director David Byrne (of Talking Heads) takes an outside-looking-in glance at Texas and Texans in True Stories. Casting himself as the protagonist/narrator, Byrne adopts what he thinks is "standard" western garb and drives his red convertible into the small town of Virgil. Here he observes the town's preparations for celebrating Texas' sesquicentennial, taking time out to introduce us to several of the local oddballs. Swoosie Kurtz plays Miss Rollings, the Laziest Woman in the World; Alix Elias is The Cute Woman, who decorates her home in the most hideously "sweet" manner imaginable; John Goodman is talent-contest entrant Louis Fyne, who harbors dreams of being a C&W star; Spalding Gray is Earl Culver, a vegetable-obsessed civic leader; Jo Harvey Allen is The Lying Woman; and so it goes. The script by Southerners Byrne, Beth Henley and Steven Tobolowksy strives to avoid subtlety.

Alix Elias
as The Cute Woman

John Ingle
as The Preacher

Matthew Posey
as The Computer Guy

Capucine DeWulf
as The Little Girl on the Road

Frank Smith
as Man in Church

Ed Geldart
as Grandfather in Mall
View All