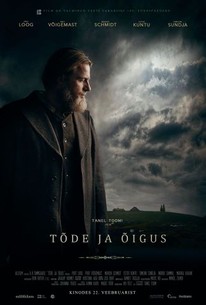 Estonia, 1870. Young and staunch Andres along with his wife Krõõt arrive at a farm bought on a loan to establish their new life. Desolate and neglected between the marshes, Robber's Rise must be transformed into a place that will take care of the family. All they have to do is to break the resistance of the barren land, make his neighbour cooperate, and raise an heir - a son to inherit his father's life's work. But when nature refuses to bend, the neighbour turns out to be a roughneck rival, and Krõõt keeps giving birth to daughters, Andres struggles to find the right way. In his desperate search for truth and justice - from the court, the tavern and the Bible, he sacrifices his family, his friends and eventually himself. The beautiful dream of prosperous and nurturing Robber's Rise gives way to an obsession, resulting in none of the things Andres wanted and everything he was afraid of.

There are no featured audience reviews for Truth and Justice (Tõde ja õigus) at this time.