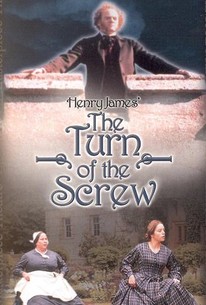 Turn of the Screw

This adaptation of the classic novel by Henry James, produced for British television and shown in the United States as part of PBS's Masterpiece Theatre series, stars Jodhi May as Miss, a young woman hired as a governess by the Master (Colin Firth), a charming but mysterious man who wants Miss to care for his two children, with the unusual stipulation that she have no contact with him. Despite this edict, Miss becomes infatuated with the Master and comes to enjoy her work; the children are good-natured and fun to care for, and she makes a good friend in housekeeper Mrs. Grose (Pam Ferris). But, one day, she sees something strange in the house: the ghost of Peter Quint (Jason Salkey), the Master's former valet, who died under mysterious circumstances. Miss learns that her predecessor as governess, Miss Jessel (Caroline Pegg), also drowned, in an incident that raised many questions, with some believing the Master to blame. Miss learns that the children can see the ghosts too, though most adults cannot, and she fears that she has fallen into a situation of grave danger. The Turn of the Screw was directed by Ben Bolt, whose previous television experience includes the series Prime Suspect and An Unsuitable Job for a Woman.

Jodhi May
as Miss

Colin Firth
as The Master

Critic Reviews for Turn of the Screw

Audience Reviews for Turn of the Screw

There are no featured audience reviews for Turn of the Screw at this time.

Turn of the Screw Quotes