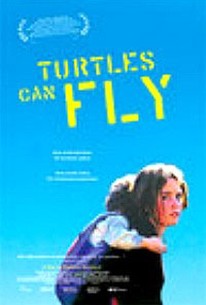 Set in Iraq after the fall of Saddam, Turtles Can Fly is being hailed as extraordinary, moving, and lyrical.

Turtles Can Fly, written and directed by Bahman Ghobadi (Marooned in Iraq, A Time for Drunken Horses) takes place in the days leading up to America's second war against Iraq, in a small village and refugee camp on the border of Iraq and Turkey. Soran Ebrahim stars as Satellite, a boy nicknamed for his obsession with technology. Satellite is also obsessed with the United States, and sprinkles bits of English throughout his speech. His strong personality and his resourcefulness have made him a leader among the younger children in the village. He even convinces the village elders to trade in their radios and purchase a satellite dish so they can watch news broadcasts on the upcoming war. Tension mounts as the village waits to hear when the U.S. will invade. For his part, Satellite finds himself smitten with an orphan girl, Agrin (Avaz Latif), who wanders into the refugee camp with her armless older brother, Henkov (Hirsh Feyssal), and a little boy who is nearly blind. Henkov earns a meager living clearing minefields, like Satellite, so Satellite sees him, at first, as a rival. But his earnest desire to help Agrin eventually extends to her family. Satellite and his friends find moments of joy amid the chaos and destruction, but Agrin seems haunted by past events too painful to reconcile, and her brother Henkov derives no pleasure from his seeming ability to predict the future. Turtles Can Fly was shown by the Film Society of Lincoln Center in 2005 as a part of the Film Comment Selects series.

Soran Ebrahim
as Soran, aka `Satellite'

Critic Reviews for Turtles Can Fly

Audience Reviews for Turtles Can Fly