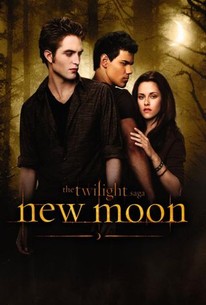 The Twilight Saga's second installment may satisfy hardcore fans of the series, but outsiders are likely to be turned off by its slow pace, relentlessly downcast tone, and excessive length.

The supernatural tale of star-crossed lovers continues as the Cullen family flees Forks in order to protect Bella (Kristen Stewart), and the heartbroken high-school senior discovers that vampires aren't the only creatures in town. Realizing that Bella will never be safe as long as he's around, Edward (Robert Pattinson) makes the difficult decision to leave his beloved behind shortly after her 18th birthday. Reeling from her loss, Bella embraces self-destruction after being comforted by Edward's image during a moment of mortal peril. But as heavy-hearted as Bella may be, her old friend Jacob (Taylor Lautner) distracts her from her sorrows by helping her renovate a weather-beaten motorbike. When Bella encounters a former adversary with a sizable grudge, she's rescued from harm at the last second by pack of enormous, ferocious wolves. Subsequently delving into the history of the Quileutes, Bella discovers the secrets of Jacob's tribe while looking forward to a reunion with Edward that may have deadly consequences. ~ Jason Buchanan, Rovi

Alessandro Federico
as Policeman
View All

Sinking Our Teeth Into Twilight, Day 2: New Moon
RT on DVD & Blu-Ray: A New Moon and a Frog Princess
5 Facts About The Twilight Saga: Eclipse
View All