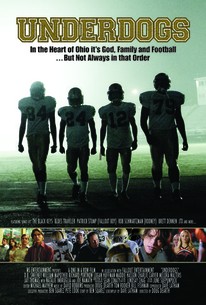 In the vein of Friday Night Lights and The Blind Side, UNDERDOGS is based on the inspirational true events of a high school football team no one expected to succeed. In small town America, high-school football is everything. For the players, it provides notoriety and a possible ticket to a bigger world. For the community, it's a source of pride. Filmed in Canton, Ohio, UNDERDOGS focuses on the Knights, a lousy team who've become an easy target for jokes. Just when they begin to give up hope, a new coach arrives, helping the lovable losers see their true potential. At the same time, quarterback Bobby Burkett falls in love with a cheerleader from a rival powerhouse, the Vikings. This enrages Vikings' star, John Handon, a bratty rich kid who has his eye on the same girl. Meanwhile, Bobby's father is waging his own war with Handon's dad, whose crooked corporation is suing him over an invention he patented. UNDERDOGS ventures deeper than most films in the sports genre. Using football as a backdrop, director Doug Dearth has crafted a heartwarming and rabble-rousing crowd pleaser, that's sure to have both young and old on their feet by it's exhilarating ending. (c) Official Site