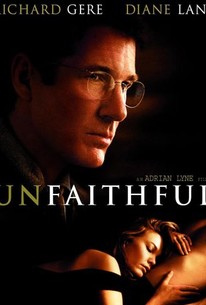 Diane Lane shines in the role, but the movie adds nothing new to the genre and the resolution is unsatisfying.

Diane Lane is a wayward wife and Richard Gere is her suspicious husband in Adrian Lyne's Unfaithful. Connie (Lane) leaves her suburban home on an errand, venturing into Manhattan during a wicked windstorm. On a trash-strewn Soho street, she literally runs into Paul Martel (Olivier Martinez), a handsome young Frenchman carrying a huge stack of books. Connie has a bad scrape on her knee, and is unable to get a cab, so Paul invites her up to his apartment. Paul is quietly flirtatious as he gives Connie some ice and a bandage for her knee. Connie phones home and explains to her son, Charlie (Erik Per Sullivan), that she's running late. Before she leaves, Paul gives her a book of Persian poetry, The Rubaiyat of Omar Khayyam. She mentions the encounter in passing to Edward (Gere), her husband, but it's clear that she's obsessing about Paul, and soon she's back in the city, with a pretext for calling him up. Soon, they are lovers, and they grow bolder and bolder in their passion. Edward begins to suspect, and eventually gets a private investigator (Dominic Chianese of The Sopranos) to follow Connie. His worst fears confirmed, Edward decides to confront Paul, a decision that will come to haunt him. While the screenplay for Unfaithful is credited to Alvin Sargent (Ordinary People) and William Broyles Jr. (Cast Away), the inspiration for Lyne's film came from Claude Chabrol's acclaimed 1969 film La Femme Infidele. ~ Josh Ralske, Rovi

Erik Per Sullivan
as Charlie

Damon Gupton
as Other Businessman

George Miller (I)
as Businessman No. 1

Paul D. Failla
as Businessman No. 2

Hal Smith-Reynolds
as Businessman No. 3

Tyree Michael Simpson
as Businessman No. 4

Murielle Arden
as Other Woman

Salem Ludwig
as Man with Suitcase

Tommy R. McGoldrick
as Cop Outside Auction
View All