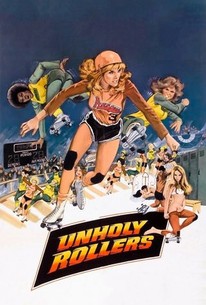 Claudia Jennings stars as Karen Walker, a woman who sets her sights for roller derby success. Released a few months after Raquel Welch's Kansas City Bomber, Unholy Rollers gives the Welch film a run for its money, despite its exploitation budget, by adding nudity and lesbianism. After being sexually harassed by her loutish boss at the factory, Karen walks out of her job and tries out for the roller derby. She quickly wins a spot on the team and rises to the top, intent on ignoring the violence and grandstanding and concentrating on winning games. Although her teammates dislike her, Karen becomes a hit with the roller derby fans. But soon, her desire for victory becomes an obsession and she ends up losing not only her cool but also most of her clothes.

Betty A. Rees
as Mickey

Michael B. Miller
as Referee

Eve Bruce
as Woman in Bar

Alvin Hammer
as Man in Bar

Victor Argo
as Vinnie the Trainer

Abbi Henderson
as Girl in Supermarket

Kres Mersky
as Girl in Bar

Joe Madrid
as Demon
View All

Kim Newman on… Hex
View All

There are no featured audience reviews for Unholy Rollers at this time.