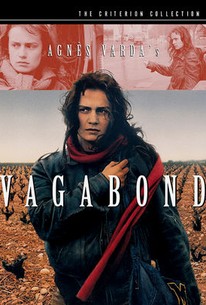 Vagabond, directed by Agnes Varda is the dark disturbing story of a female drifter named Mona (Sandrine Bonnaire). The film opens as Mona's frozen body is found in a drainage ditch and proceeds to tell her story in a series of flashbacks and semi-documentary style "interviews" with the people who have known Mona during the last few weeks of her life. Mona is a distant, independent and not-very-likeable woman who goes from place to place, living where she can and with anyone who will take her in. Mona's true nature remains a puzzle, both to those who thought they knew her, and to the audience. As the movie progresses it becomes clear that no one knew the true Mona and she, because of her aloofness and essential coldness, provided a canvas for those she met to write upon. Who Mona really was, and what she thought remains ambiguous. Sandrine Bonnaire is excellent as Mona, making an unappealing and cold character interesting and intriguing. Director Agnes Varda began her career as a still photographer. This beginning is evident in her elegant framing of the film. She has an instinctive awareness of and a photographer's eye for visual detail which makes the film cold, bleak, and aridly beautiful. Internationally acclaimed, Vagabond is Varda's most successful film. ~ Linda Rasmussen, Rovi