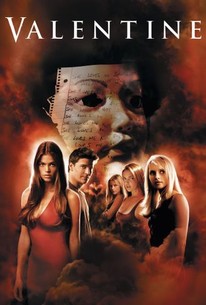 Valentine is basically a formulaic throwback to conventional pre-Scream slasher flicks. Critics say it doesn't offer enough suspense or scares to justify its addition to the genre.

The novel of the same name by author Tom Savage becomes this horror film starring Marley Shelton as Kate Davies. Kate's in a troubled relationship with journalist Adam Carr (David Boreanaz), a problem drinker, but she receives support from her best friends, the same four girls she's known since grade school: Paige Prescott (Denise Richards), Dorothy Wheeler (Jessica Capshaw), Lily Voight (Jessica Cauffel), and Shelly Fisher (Katherine Heigl). When Shelly is murdered and the other girls begin receiving gruesome Valentine's Day cards signed "JM," they begin to speculate that the killer could be an awkward schoolmate named Jeremy Melton, whom they once teased mercilessly at a school dance, leading to his beating and humiliation. Dorothy in particular is afraid that a false accusation she made against Jeremy might be causing him to seek bloody retribution, but the macho detective (Fulvio Cecere) assigned to investigate Shelly's murder has some other suspects in mind. As the body count is racked up and Dorothy's lavish Valentine's Day party approaches, Kate begins to suspect that the true identity of Jeremy, who likely underwent plastic surgery to alter his appearance, could hit very close to home. Valentine is the second slasher flick from Urban Legend (1998) director Jamie Blanks.

Basia Antos
as Video Woman No. 1

Aaron Dudley
as Video Man No. 1

Dalias Blake
as Video Man No. 2

Chris Webb
as Video Man No. 3

Carla Boudreau
as Video Woman No. 2

Vanessa Volker
as Video Woman No. 3