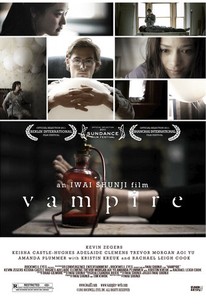 A man who is not an ordinary creature of the night is on the prowl in this offbeat blend of horror and comedy from Japanese director Shunji Iwai. Simon (Kevin Zegers) and Jellyfish (Keisha Castle-Hughes) are a young couple who have recently met on-line; both are deeply depressed, and have decided to take their lives in a suicide pact. However, while Jellyfish kills herself according to plan, Simon does not; instead, after her death he drains her blood and begins drinking it. Simon doesn't have fangs or an aversion to garlic and sunlight, but he imagines himself a vampire and uses internet chat rooms as a place to search for new victims. When he isn't on the prowl for blood, Simon works as a schoolteacher and looks after his mother (Amanda Plummer), who is slipping into dementia. As Simon begins courting a potential new victim, a beautiful young woman named Ladybird (Adelaide Clemens), he has to deal with a stalker named Laura (Rachael Leigh Cook) and his fellow vampire sidekick Renfield (Trevor Morgan), whose methods lack Simon's level of restraint. Vampires was an official selection at the 2011 Sundance Film Festival.

Yû Aoi
as Mina
View All

There are no featured audience reviews for Vampire at this time.